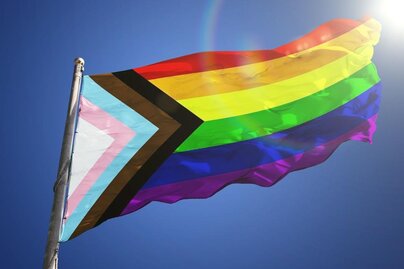 Original Article by SIG Members
Pride Comes in All Ages and Colors
Benjamin F. Shepherd, M.Ed., Nova Southeastern University
Paula M. Brochu, Ph.D., Nova Southeastern University
Ashley M. Stripling, Ph.D., Nova Southeastern University
October 11, 2020
October is LGBTQ+ History Month, an annual observance of the LGBTQ+ Liberation Movement. This movement was founded on the pain, bravery, and advocacy of sexual and gender minority (SGM) people, many of whom are older adults today. Yet, when we celebrate LGBTQ+ History Month, we often think about young adults attending Pride events, effectively erasing SGM older adults from the LGBTQ+ community. In fact, research shows most of the resources and programming aimed at serving the LGBTQ+ community favor the young.¹ This article seeks to honor those who lived the history and acknowledge the unique and contextual challenges faced by SGM older adults, including SGM older adults of color, in order to better address the diverse health needs of this group.

Challenges faced
Born before the Stonewall riots that started the modern LGBTQ+ Liberation Movement and the Civil Rights movement, SGM older adults grew up in less affirming environments in which homophobic prejudice, stigma, discrimination, and violence were legal, widespread, and commonplace. During this time, same-sex sexual activity resulted in imprisonment, homosexuality was labeled as a mental disorder, and conversion therapy was acceptable.² Although public acceptance and legal protections of US SGM individuals have recently made large strides (e.g., same-sex marriage legalized in 2015, federal workplace protections granted in 2020), SGM older adults carry the emotional, social, and economic disadvantages that come from lifelong stigmatization.

Due to lifelong social pressures, many SGM older adults experience high levels of internalized stigma and feel the need to hide their true selves from healthcare providers, employers, community members, friends, and/or family.² ⁵ SGM older adults of color are even more likely to conceal their identities across settings due to cultural influences (e.g., machismo).⁸ This is unfortunate because internalized stigma and identity concealment perpetuate psychological distress and, in turn, adversely impact SGM older adults’ mental and physical health.⁶ ⁷ This can leave SGM older adults ill-equipped to deal with age-related challenges, such as health and long-term care. Specifically, many SGM older adults are estranged from their biological families and lack loved ones to care for them as they age.²  Furthermore, nursing homes and other long-term care institutions are not always SGM-friendly (e.g., refusing room sharing among same-sex couples or to place transgender older adults in wards that match their gender identity).⁷ In one study, 34% of SGM older adults reported they would “go back into the closet” if they had to move to a retirement facility.⁹ As a result, many SGM older adults find themselves dealing with social isolation and loneliness, both of which are associated with dementia, heart disease, and other health outcomes.⁷

What you can do to help
Given these challenges, a unified LGBTQ+ community that provides all SGM older adults, regardless of age or color, the opportunity to be fully open and authentic about their identities could improve health outcomes and promote healthy aging.¹ Additionally, given the prevalence of health disparities among SGM older adults, it is important that care facilities implement SGM-affirmative, evidence-based training and programming, such as the Seniors Preparing for Rainbow Years [SPRY] program.

Because the psychological and social factors contributing to these health disparities are complex, we also recommend that SGM older adults become a focus of future psychological research in order increase awareness and understanding of how intersecting identities and minority stressors affect this diverse, historically underserved population. For example, identity concealment likely influences bereavement experienced by SGM older adults due to the loss of a partner.¹⁰ Such knowledge can help agents of change develop culturally responsive interventions that foster well-being among SGM older adults.

This LGBTQ+ History Month, let’s not forget about the SGM older adults in our communities, including SGM older adults of color. After all, many of the original leaders of the LGBTQ+ Liberation Movement were people of color, such as Marsha P. Johnson and Sylvia Rivera. Reach out, learn from, and express your gratitude and appreciation today.