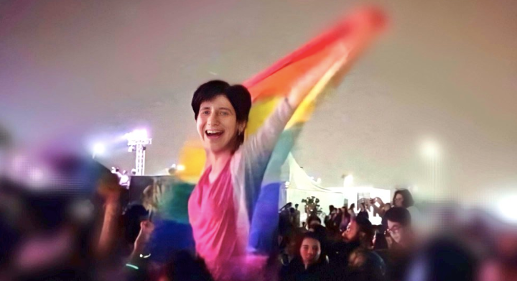 Original Article by SIG Members
Queer Arab Identities: Honoring Those Who Have Paved the Way
Kareen M. Matouk, PhD (she/her/hers), Columbia University Irving Medical Center/Gender Identity Program
Melina Wald, PhD (she/they), Columbia University Irving Medical Center/Gender Identity Program
December 14, 2020
Today marks six months since the tragic passing of Sarah Hegazi, a lesbian Egyptian LGBTQI+ and human rights advocate. Sarah took her life at the age of 30, in her home in Canada, where she sought asylum following an arrest in 2017 for courageously raising a rainbow flag at Mashrou’ Leila’s rock concert in Cairo, Egypt. Although being gay is legal in Egypt, she and fellow concertgoers who raised Pride flags that night were arrested for “promoting sexual deviancy” and “debauchery.” Sarah experienced significant trauma due to inhumane torture and subsequent sexual assault in prison.

The criminalization of LGBTQI+ identities is a reality for queer individuals in many Arab countries who may be targeted for their gender expression, appearance, or for seeking out relationships on dating apps. Discrimination and marginalization are common experiences affecting Arab LGBTQI+ individuals, as there is a lack of anti-discrimination laws protecting the queer community (barring Israel).¹ Thus, being openly queer in the Middle East is incredibly dangerous. According to the Human Rights Watch, the following countries continue to criminalize same sex relationships: Algeria, Egypt, Iran, Kuwait, Lebanon, Libya, Morocco, the Palestinian Territories, Oman, Qatar, Saudi Arabia, Syria, Tunisia, and Yemen.² Several countries, including Kuwait, Oman, Saudi Arabia, and the United Arab Emirates criminalize forms of gender expression and use laws that ban “cross-dressing” to target transgender communities. Appallingly, Iran, Qatar, Saudi Arabia, and Yemen even maintain the death penalty as punishment for “same-sex relations.” Additionally, although Egypt, Jordan, Bahrain, and Iraq are the only Arab countries where it is legally acceptable to be queer, many Arab LGBTQI+ individuals continue to be prosecuted under similar charges used against Sarah Hegazi.

The United States invasion of Iraq following 9/11 led to the rise of the Islamic State in Iraq and Syria (ISIS). Unfortunately, it exacerbated preexisting conditions for LGBTQI+ Arabs and facilitated a flood of persecutions due to ISIS’ rejection of LGBTQI+ individuals.³ While some Arab nations express support and legal protections for transgender people, discrimination remains rampant, hinders safety, and incites harm to LGBTQI+ Arabs. For example, the Iranian government has permitted gender-affirming surgery under medical approval; however, this is presented as an alternative to the death sentence for sexual minorities.⁴ Thus, gay cisgender individuals in these countries are faced with the impossible choice of expressing their sexual identity only if they undergo an unwanted and coerced social and medical gender transition approved by governmental authority.

Queer identity for Arabs is further complicated by a culture that views queerness as a purely Western creation and highlights the triangulated ideal of “good Arab family, good Arab girls, and compulsory heterosexuality.”⁵ The patriarchal and heteronormative nature of Arab society, which stresses heterosexuality and traditional gender roles, can stunt the development LGBTQI+ identities. Moreover, given that sexuality is taboo in Arab culture, queerness is often rendered invisible.⁶ This lack of visibility for queer Arabs presumes that the community does not exist and creates internalized tension for Arab LGBTQI+ individuals.⁷ Additionally, the emphasis in Arab culture on upholding the family name and reputation often precludes exploration of LGBTQI+ identities, which may bring shame upon one’s community.⁸ This may be heightened by religious identity, which can further lead an individual to repress, avoid, or deny their LGBTQI+ identities.⁹ Thus, the pressure to avoid isolation, rejection, and disapproval from their community is a common experience for those who hold intersecting queer and Arab identities. Furthermore, the influence of acculturation and acculturative stress may lead to even more challenges for Arab LGBTQI+ individuals in Western countries, such as the U.S. and Canada. Racism in LGBTQI+ communities is often compounded by rejection from the Arab community due to homophobia or transphobia for these individuals.¹⁰

Despite limited visibility of queer Arabs, many are organizing and developing queer communities to build a movement towards liberation, acceptance, and safety. Queer Arab communities are remarkably resilient against adversities, including courageous activists like Sarah Hegazi who have fought to advance the rights of Arab LGBTQI+ individuals. Bravely, thirty-four activists from 16 different Arabic-speaking countries recently shared their stories of resistance in a report published in 2018. Projects like these are incredibly influential in challenging myths and stereotypes about Arab LGBTQI+ individuals, while also inspiring connection among Arab LGBTQI+ folks. Moreover, video series (e.g., No Longer Alone) and podcasts (e.g., The Queer Arabs Podcast) enhance visibility for many queer Arabs. Some artists, like the anonymous artist known as Queer Habibi (below), use their art to illustrate the intersection of their cultural and sexual identities in everyday life. These powerful forms of activism shed light on the Arab LGBTQI+ community, as well as promote hope and optimism. Another important moment of hope for Egypt’s transgender community occurred when a famous actor, Hisham Salim, expressed his love and support of his 26-year-old transgender son on Arabic television in May 2020.

​Recommendations for Providers:
The awareness of these intersectional identities is incredibly important to providing good evidence-based care. While clinicians should stay attuned to the idiosyncratic ways in which queer Arabs experience their identities, the following considerations in treatment are provided as a starting point.
Footnote:
For the purpose of this article, we used the term Arab. This refers to individuals who have ancestry in any of the Arab countries in the Middle East and North Africa (MENA) region.  In addition, although religious factors may be central components to many Arab individuals, we recognize that Arab identity may or may not intersect with various religious identities.
​@artqueerhabibi
References: