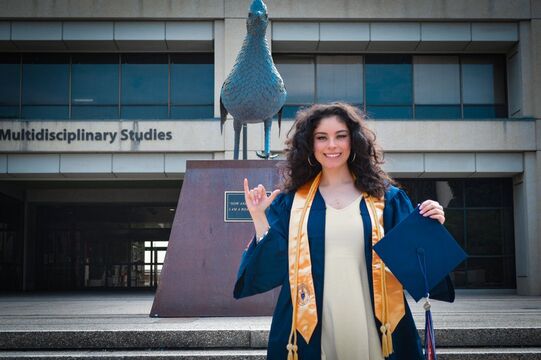 Original Post by SIG Member
2021 Diverse Scholar Development Award Recipient: Bryanna Garibay
Bryanna Garibay, The University of Texas at San Antonio
January 22, 2022
My name is Bryanna Garibay. I am a first-year psychology master’s student at the University of Texas at San Antonio. I identify as Latina and Queer. It is an honor to receive the first ever Diverse Scholar Development Award from the SGM SIG, an award helping those who are underserved attend ABCT!
​
This was my first time attending ABCT and attending a conference in general. Although ABCT was hosted online due to COVID-19, it was still an amazing experience that I will always remember! ABCT definitely tried as hard as they could to make the experience as close to as in-person as possible.

I was very unsure how conferences worked and what kinds of things happened at conferences. The layout of the website for attending the conference was very user-friendly and I was able to navigate it seamlessly. One advantage to ABCT being hosted online was that I was able to attend so many sessions and look at countless posters. I was even able to look into some areas I never thought about researching! I remember attending some sessions that I probably would not have attended in person — topics such as eating disorders, ADHD, and a few others. Even though those topics are not my area of research, they were so cool to attend and learn more about.
Attending the SGM SIG meeting before the kick-off of ABCT really made me feel a lot closer to those also attending and made me feel a lot more comfortable attending my first ever conference. It was really amazing to see other people who are studying the same topics as me.

Through the SGM SIG, I had the pleasure of meeting with Dr. Brian Feinstein, an associate professor in the department of psychology at Rosalind Franklin University. Dr. Feinstein’s research interests include mental health and substance use in SGM populations, particularly bi+ populations. This was a topic I recently became interested in, so I was excited to talk to him. I loved hearing his story about what brought him to where he is today. He described that he always had an interest in health disparities, and he even started a Gender and Sexuality Alliance when he was in high school! Upon completing undergrad, Dr. Feinstein explored his research interests by trying to work with people studying sexual and gender minority populations. He quickly began to see how few people were in this area of research. In 2008, Dr. Feinstein joined the SGM SIG. He loved that the SIG provided a safe space for him and his research. Seeing others who had careers in SGM research made him feel like his dreams of working with SGM populations were tangible.

Having a group such as the SGM SIG to be a part of is something that really makes me feel safe and not alone. Due to my background, growing up with a lot of obstacles in my way, I did not even imagine being in the place I am right now. It feels so comforting to know there are so many people supporting me, including the SIG. Although the SIG has grown so much since it has started, I cannot wait to see where the future takes it. I hope a lot more people who are just like me join the SIG and see that they too can achieve their dreams!